For young Landon C., a simple activity like writing or cutting with scissors took every ounce of his determination. Much more determination, in fact, than seemed necessary for such an intelligent and eager child. But Landon actively avoided reading and homework, complaining of tummy aches and feeling overwhelmed.

“It seemed like it took everything in him to maintain his grade—more than it should have,” his parents Dave and Joselyn recall, thinking back to May of 2015. At that time, Landon was putting so much effort into schoolwork that he was “exhausted by early evening, making homework an invitation for breakdowns.” The concerned parents had previously been handed a diagnosis of Attention Deficit Disorder (ADD), but were skeptical of this answer and sought out vision testing with Dr. G, a developmental optometrist and member of the College of Optometrists in Vision Development (COVD). As an international association for optometrists who provide vision therapy and the vision therapists in their employ, COVD works to educate both medical professionals and the public about this drug-free, effective form of treatment for conditions affecting problems with the teamwork between eyes and brain. “We could not believe how much [Dr. G] could tell us about our child JUST through [examining] his vision,” Landon’s parents exclaim, “She told US [what he was struggling with] before we told HER!”

Like many other children, Landon’s learning-related vision problem had been misdiagnosed as ADD. This second opinion was a huge relief to Joselyn and Dave—“We were overjoyed to hear there was a life-changing solution that didn’t involve a pill.” The family learned that one of Landon’s eyes saw perfectly while the other was near-sighted. The large difference between them meant that his eyes couldn’t team and track together normally, so his brain “solved” the problem by turning each eye on and off throughout the day. This used a great deal of energy and caused the exhaustion, overwhelm, and nausea Landon had been struggling with for so long.

After eight months of strong commitment, Landon has successfully retrained his brain and eyes to work together. His greatest victory by far is a newfound ease with reading. “Once a source of conflict,” say his parents, “[reading] became a welcomed bedtime routine.” The huge effort once needed for a hard-earned low-A average has given way to easier, consistent A-plusses. In Landon’s own words, “Before I started [vision] therapy, reading was so hard for me […] I had to keep reading the page over and over to understand. But when I finished therapy, I could read so much better. And that’s how vision therapy changed my life.”

Do you believe child may be struggling with an undiagnosed vision problem like Landon’s that is affecting their ability to learn? Children with vision problems are three times more likely to be diagnosed with ADD (source), and one in ten children may have a vision problem that impacts their success in school (source). August is Vision & Learning Month and a comprehensive vision exam with a developmental optometrist will ensure your child is starting off their schoolyear on the right foot. Locate a Doctor at covd.org and schedule an appointment today! 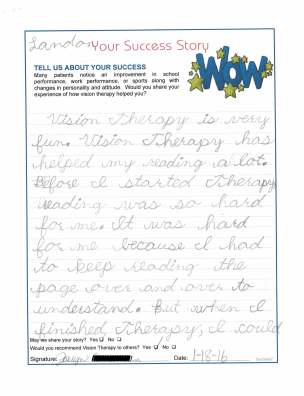